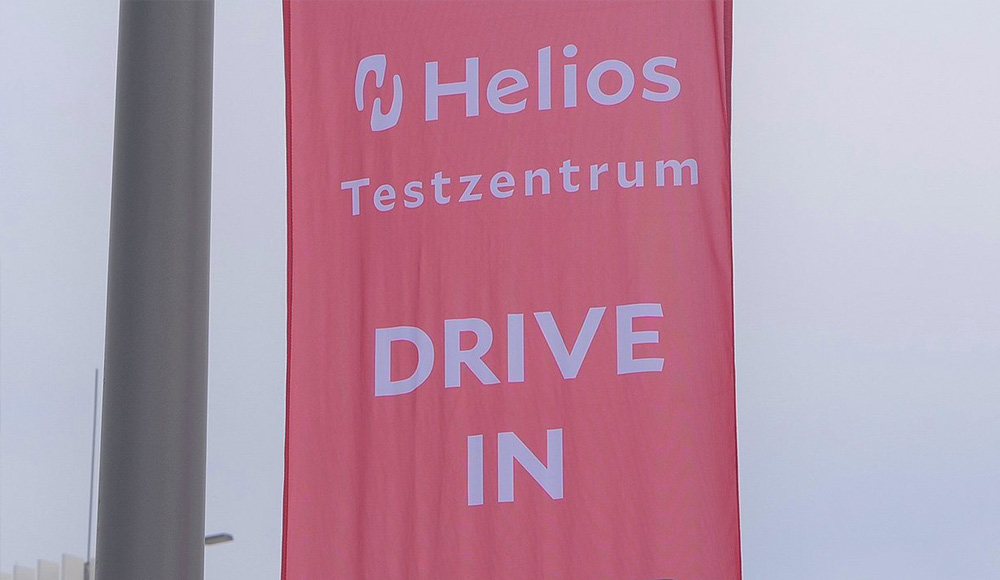 The test center allows citizens to have Corona rapid tests and PCR tests performed. In the case of a positive rapid test, the clinic is the first in Hildesheim to offer a PCR test immediately afterwards to cross-check the result. The process is completely digital thanks to the ClinXIdent software solution from Ondamedia. In the future, the project will be rolled out to all Helios clinics throughout Germany.

“Even though test centers are currently springing up like mushrooms, we can offer citizens services with us that they can’t get elsewhere. In addition, with us and Ondamedia, only experienced professionals from the healthcare sector are involved,” explains clinic CEO Sascha Kucera, explaining why he decided to establish a test offer for the population at the clinic. At the Helios Test Center, for example, a positive rapid test can be immediately cross-checked with a PCR test to rule out false positive results. Such an offer did not previously exist in Hildesheim. Upon presentation of a corresponding certificate for a positive rapid test from another test center, a PCR test can also be performed directly at Helios for verification. PCR testing is performed in the clinic’s own laboratory. Depending on the workload, the result is usually available within a few hours. Self-payers can also have PCR tests performed here, for example for a planned trip.

Registration for a test appointment is conveniently done via a link on the hospital’s homepage. Alternatively, a QR code can be scanned directly at the hospital using a smartphone. The associated ClinXIdent software enables a completely digital process from registration to transmission of the test result certificate and meets all legal data protection requirements. The software is a further development of the hospital’s digital visitor registration system. Thanks to the experts from Ondamedia and Helios, the software also offers the special feature of creating a digital connection between the test center and the laboratory. This leads to a significantly faster PCR test result and the test person is immediately informed about the test result via smartphone. A project that was developed in Hildesheim for Helios and will be rolled out to all of the group’s clinics throughout Germany in the future.

Ondamedia is an international technology company that has developed the MEDIX-CARE platform for the healthcare market and is currently implementing it in many clinics in Germany and abroad. The focus of MEDIX-CARE is on digitizing and automating clinical processes to better engage patients in their care processes and simplify internal workflows. These digital steps increase the quality of care and at the same time reduces the workload of nursing staff, resulting in measurably better treatment outcomes overall.

Ondamedia works closely with national and international partners to efficiently implement the wide range of clinical use cases based on MEDIX-CARE. Ondamedia has over 20 years of experience in digitization and has implemented more than 18000 active installations with over 15000 transactions per day during this time.

Helios is Europe’s leading private hospital operator with a total of around 120,000 employees. Under the umbrella of the holding company Helios Health, the company owns Helios Kliniken in Germany and Quirónsalud in Spain and Latin America. Around 20 million patients opt for medical treatment at Helios every year. In 2020, the company generated total sales of 9.8 billion euros.

In Germany, Helios has 89 hospitals, around 130 medical care centers (MVZs) and six prevention centers. Around 5.2 million patients are treated annually in Germany, 4.1 million of them on an outpatient basis. Helios employs 73,000 people in Germany and generated sales of 6.3 billion euros in 2020. Helios is a partner of the “Wir für Gesundheit” hospital network. The company’s headquarters are in Berlin.

Quirónsalud operates 52 clinics, including six in Latin America, 70 outpatient health centers and around 300 facilities for occupational health management. It treats around 15 million patients a year, 14.1 million of them on an outpatient basis. Quirónsalud employs around 40,000 people and generated sales of 3.5 billion euros in 2020. Helios Germany and Quirónsalud are part of the Fresenius healthcare group.

This website uses cookies to improve your experience while you navigate through the website. Out of these cookies, the cookies that are categorized as necessary are stored on your browser as they are essential for the working of basic functionalities of the website. We also use third-party cookies that help us analyze and understand how you use this website. These cookies will be stored in your browser only with your consent. You also have the option to opt-out of these cookies. But opting out of some of these cookies may have an effect on your browsing experience.
Necessary Always Enabled
Necessary cookies are absolutely essential for the website to function properly. This category only includes cookies that ensures basic functionalities and security features of the website. These cookies do not store any personal information.
Functional
Functional cookies help to perform certain functionalities like sharing the content of the website on social media platforms, collect feedbacks, and other third-party features.
Performance
Performance cookies are used to understand and analyze the key performance indexes of the website which helps in delivering a better user experience for the visitors.
Analytics
Analytical cookies are used to understand how visitors interact with the website. These cookies help provide information on metrics the number of visitors, bounce rate, traffic source, etc.
Advertisement
Advertisement cookies are used to provide visitors with relevant ads and marketing campaigns. These cookies track visitors across websites and collect information to provide customized ads.
Others
Other uncategorized cookies are those that are being analyzed and have not been classified into a category as yet.
SAVE & ACCEPT
Powered by